As we already know, technical analysis studies price charts in order to forecast future direction of prices. How does it work and what can this chart tell us? Let’s clarify this.

Let’s start with the first axiom of technical analysis – price moves in trends. The axiom meaning can be explained by the fact that price movements always have direction and continuing nature. The price may seem to move chaotically upward or downward in the chart. However, price movements have its direction, which is called trend.

Trend is a directional price movement with certain duration. Looking at the picture above we can notice that despite price moves upward and downward the general direction of all movements is upward. Now let’s get a clear view of the types of trends. They fall into three types depending on direction and duration:

a. Short-term trend lasts from several minutes to 2 weeks.

b. Intermediate trend may last from 2 weeks to half a year (6 months).

c. Long-term trend is a long-lasting price movement in one direction within several months or even years (from 6 months).

a. Uptrend (bullish trend) is a price movement in which each next minimum is higher than previous one. 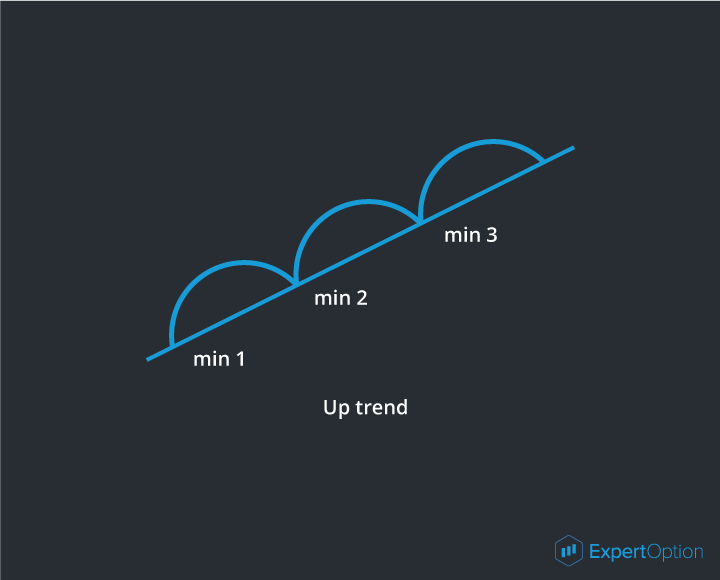 A trend line can be defined as a line, which connects the minimums of uptrend.

b. Downtrend (bear trend) is a price movement in which each next maximum is lower than previous one. A down trend line can be defined as a line, which connects the maximums of trend. Online trading is generally based on trends with the shortest duration or short-term trends. Therefore, there is no sense in searching for the trends lasting more than 30 minutes for short-term instruments in the form of online trading. It is due to the fact, that trading within one hour time frame is based on short tendencies which are not influenced by other continuing trends of longer time frames. It would be enough if you could define current tendency within 30 minute time frame and use it. In order to see the borders of a tendency to a trend line we need to build another line parallel to the trend line, which is called a channel line. The channel line is built using one or two maximum points in an uptrend or using minimum points in a downtrend. That is the way a trend channel is formed. 1. Resistance trend line – is a price level, which is prevented from increasing by the market participants. Simply put, if this level is reached, than everybody starts selling.

2. Support trend line – is the price level, which is prevented from decreasing by the market participants. Similarly, if this level is reached, than everybody starts buying. The following levels can be strength levels:

• Historical level – maximum or minimum price values reached throughout the history of trading. That is to say, market remembers these levels for a long time and will immediately respond if the price reaches these levels.

All those levels can represent resistance or support depending on whether the price is higher or lower than this level at the current moment.

Thus, we have learnt that the price movement always has its direction, which is possible to define and limit by the trend and channel lines. The duration of this movement can vary from several minutes to several months. There are also strength levels which can limit movement as well and market participants tend to make decisions basing on them. Later we are going to learn how we can use this knowledge from a practical point of view.